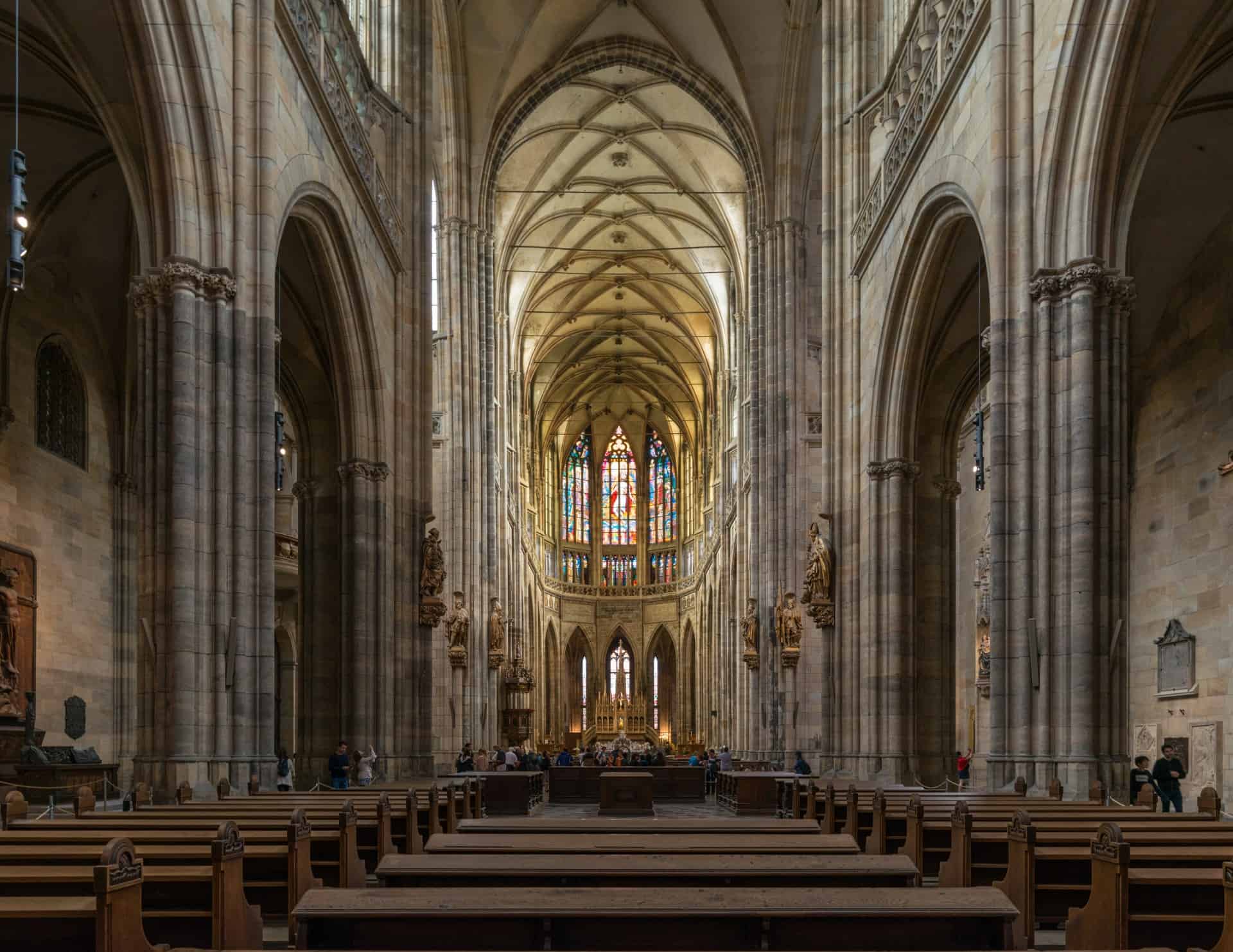 St. Vitus Cathedral has a very interesting history. Because it is not the only building in the area. Before the construction of the St. Vitus Cathedral, there were two different religious building over there. But all of them were dedicated to the same person; Saint Vitus. You can see the ground plans of all three building from the image below. The first church was a Romanesque rotunda and it was founded by the Wenceslaus I who was the Duke of Bohemia in 930. Yes, the name of the Wenceslas Square comes from him. It is thought that the Wenceslaus I used the holy relic, the arm of St. Vitus to convince the people to Christianity. Because pagans and Christians were living in Prague until the 11th in the Prague Castle.

Who Was The St. Vitus?

I just want to give a piece of brief information about the St. Vitus to know him a bit more. He was a Christian saint who was died as a martyr during the Roman persecution over the Christian by the time of Diocletian and Maximian in 303. It is not clear but his birth year was 290, that means he died only at the age of 13. St. Vitus was from Sicily and one of the Fourteen Holy Helpers of Roman Catholicism during the medieval. Also, St. Vitus Day is celebration around the world on 15 June where Julian Calendar is used which is equal to 28 June on the Gregorian Calendar.

The most exciting part of the St. Vitus Cathedral is the St. Wenceslas Chapel. St. Wenceslas was the duke of Bohemia from 921 to his assassination in 935 by his younger brother, Boleslaus the Cruel. You can also see the relics of St. Wenceslas in the chapel. The chapel was constructed by the Peter Parler with a ribbed vault between 1356 and 1364.

Where is The St. Vitus Cathedral?

St. Vitus Cathedral is located in the Prague Castle Complex where is the historical centre of Prague. If you want to come to the St. Vitus Cathedral by using public transport you have a couple of options. For the metro, you need to use the gree line (Line A) and get off at the Malostranská metro station and walk to the castle. Malostranské náměstí and Malostranská tram station are your second option to go to the St. Vitus Cathedral. You can take one of the tram lines 1, 2, 12, 15, 18, 20, 22, 23, 25 and 97 to go there. But if the weather is good and you like to walk around the city you can follow this route which includes the National Museum, Wenceslas Square, Old Town Square, Clementinum and Charles Bridge.