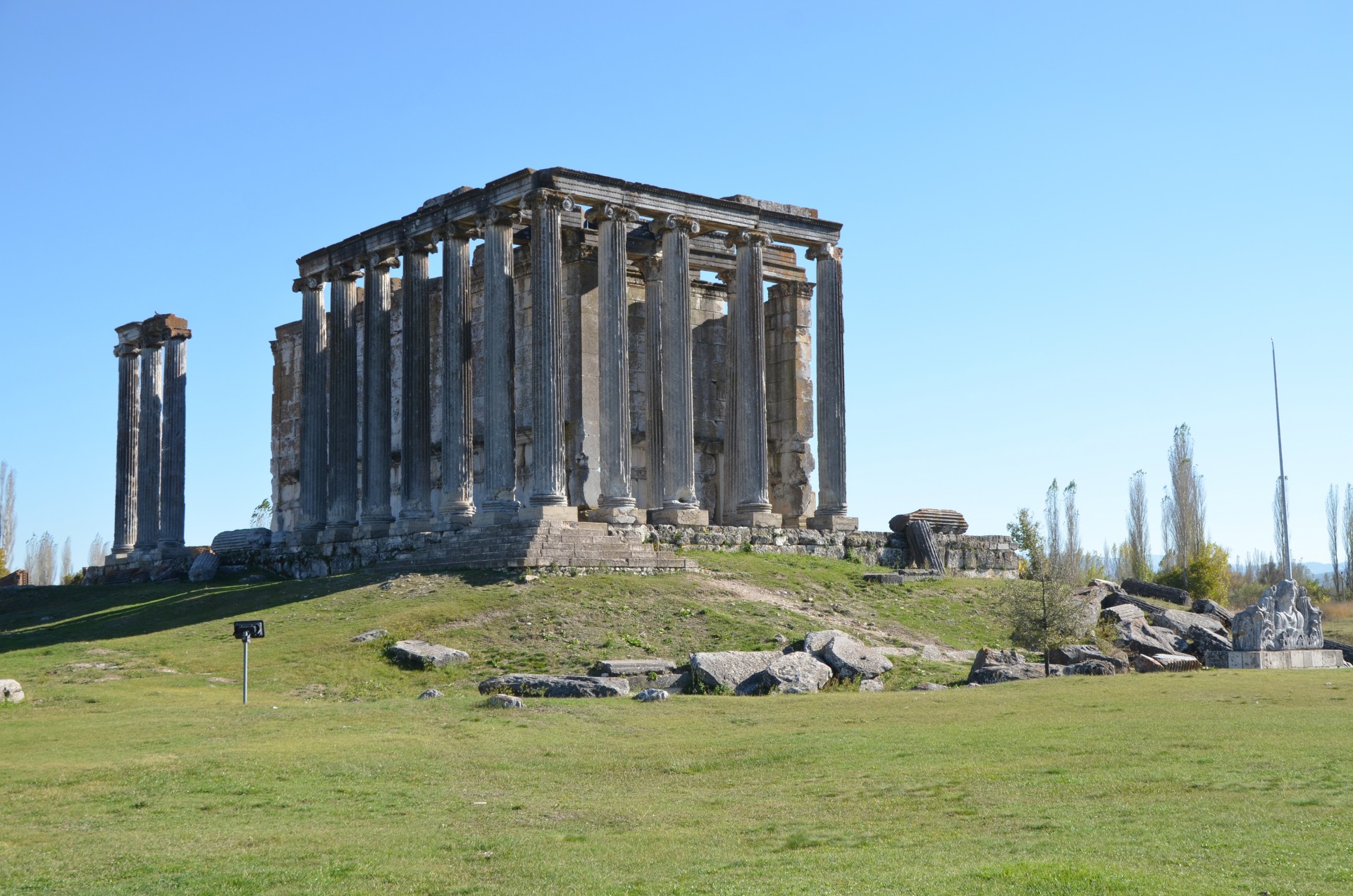 Aizanoi Ancient City and Zeus Temple one of the greatest historical monuments in Turkey. Although this city and the temple is magnificent, it doesn’t well-known enough by the people. Only 80.000 people visit here yearly. When you compare this number with Ephesus Ancient City it is nothing. Because every year more than 3.5 millions of people visit Ephesus very year.

This city is located in the Çavdarhisar town of the Kutahya province.  Çavdarhisar is around 60 kilometres away from the Kutahya city centre.  The ancient city spread over a really large area and even some part of the Çavdarhisar is over it today. Most of the archaeological sites in Turkey decorated with the reconstructions of the ancient structures which makes them little “unnatural”. But when it comes to Aizanoi it is fully natural, untouched and worth to see. There unique Roman buildings in the ancient city like Zeus Temple, Roman Bridge and Roman Bath and Theatre-Stadium complex. There are also two Turkish styled baths with mosaic, gymnasium and five more bridges which are still in use today, avenues with columns, necropolis and the sacred cave of Metre Sterne.

At the upper part of the Kocaçay (Penkalas) river, Phrygians (1200 BC) lived around the sacred cave of the goddess Metre Steunene. She was born through the union of the water nymph Erato and the mythological hero Azan. It is not clear but the archaeologist thinks the name of the Aizanoi comes from the Azan. The ancient city is the main settlement of the Aizanitisians who lived under the rule of ancient Phyrigians. You can find more information about Phyrigians on this page. But the recent excavations around the Zeus Temple extent the history of the ancient city to the 3000 BC.

In the Hellenistic era, this area was ruled by the Bergama and Bithynia. During the 2nd and 3rd centuries BC, under the rule of the Roman Empire Arizona became a rich region with its production of grains, wool and wine. Starting from the 1st century BC Aizanoi started to transform to city from town. After the Byzantine Seljuk Principality, Çavdar Tatars used this is as a military base and fort around the 13th century. From that date, the area is called Çavdarhisar. Hisar means a wall or fort-wall in Turkish.

When Was the Aizanoi Discovered?

One of the best-preserved ancient remains of the Aizanoi is bridges. Those bridges are still in use today (Two of four). They made out from large cut stones with walls. They were protecting the Çavdarhisar from the rise of the Kocaçay river. There are inscriptions to tell that the opening of the bridge happened in September 157 AD with a big ceremony. You can read this inscription on the fourth bridge.

One of the most magnificent temples in Anatolia is the Zeus Temple. It even best-preserved one in the world. Construction of the temple started around the last half of the 2nd century AD. Emperor Hadrian ordered its constructiıons. There is a stepped podium which is made from marble and the temple rise over it.  The podium is around 33 x 37 meter and originally there were 15 ionic columns on long side and 8 on the short. Today, the only column on northern and western sides are still standing. The temples were made for the two deities. The section which is above the ground for the ruler of Olympians, the Zeus and the underground part of it, is the place of Cybele cult. You will also see some battle scene depicted on the walls of the temple are belong to the Tatars from 13th century AD. There are also some small building around the temple but their history is unknown yet.

Imagine an ancient theatre and stadium. Now, think that there is a complex of both in Aizanoi Ancient City. This complex is located in the northern part of the city. Ancient theatre can have more than 20.000 of spectators and the stadium is around 14.000 more. theatre and stadium can have almost 35.000 of people which more than today’s football stadium. Aizanoi was that big! Today both of the building is heavily damaged because of the earthquakes. During the rainy season bottom of the building are full with lots of waters. It is totally free to visit these buildings.

Today, there are two ancient Roman Baths in Aizanoi Ancient City. The first one is very close to the Zeus Temples. It is located on the road from the Zeus Temple to the stadium-theatre complex. The second one is in the Çavdarhisar centre. Both buildings date back to the 2nd century AD.

Yes, that’s right! The worlds first macellum is in the Aizanoi Ancient City. This building constructed in the 2nd century and identifies as one of the oldest known commodity exchange. You can still see the inscriptions over of its walls defines the prices of goods traded in here. There are also some graves and other ruins from Roman and Turks of course. Also, you can visit the Kutahya Archeology Museum which is in the city centre of Kutahya to see other remains.

How to Go to The Aizanoi Ancient City?

Çavdarhisar is only accessible with local buses or car from the Kutahya. There is no railway, unfortunately. If you’re coming to Aizanoi from Istanbul or from other major cities you have a couple of options. First, you can come with intercity buses to Kutahya bus terminal and take a local coach to go to the Çavdarhisar. Second, You can take a flight from Istanbul to Kutahya Zafer Airport, then go to the Kutahya bus terminal with airport service than take local coach again. This way takes more time than buses, so you should think to take the coach. Third, you can use the train to come to Kutahya and go to the bus terminal and the same local coach. Of course, the most comfortable way to rent a car.

Are There Any Hotels to Stay?

If you ever visited Aizanoi Ancient City and Zeus Temple please share your thoughts and experiences to help the other travellers. Also, feel free to share your questions on the comment section.