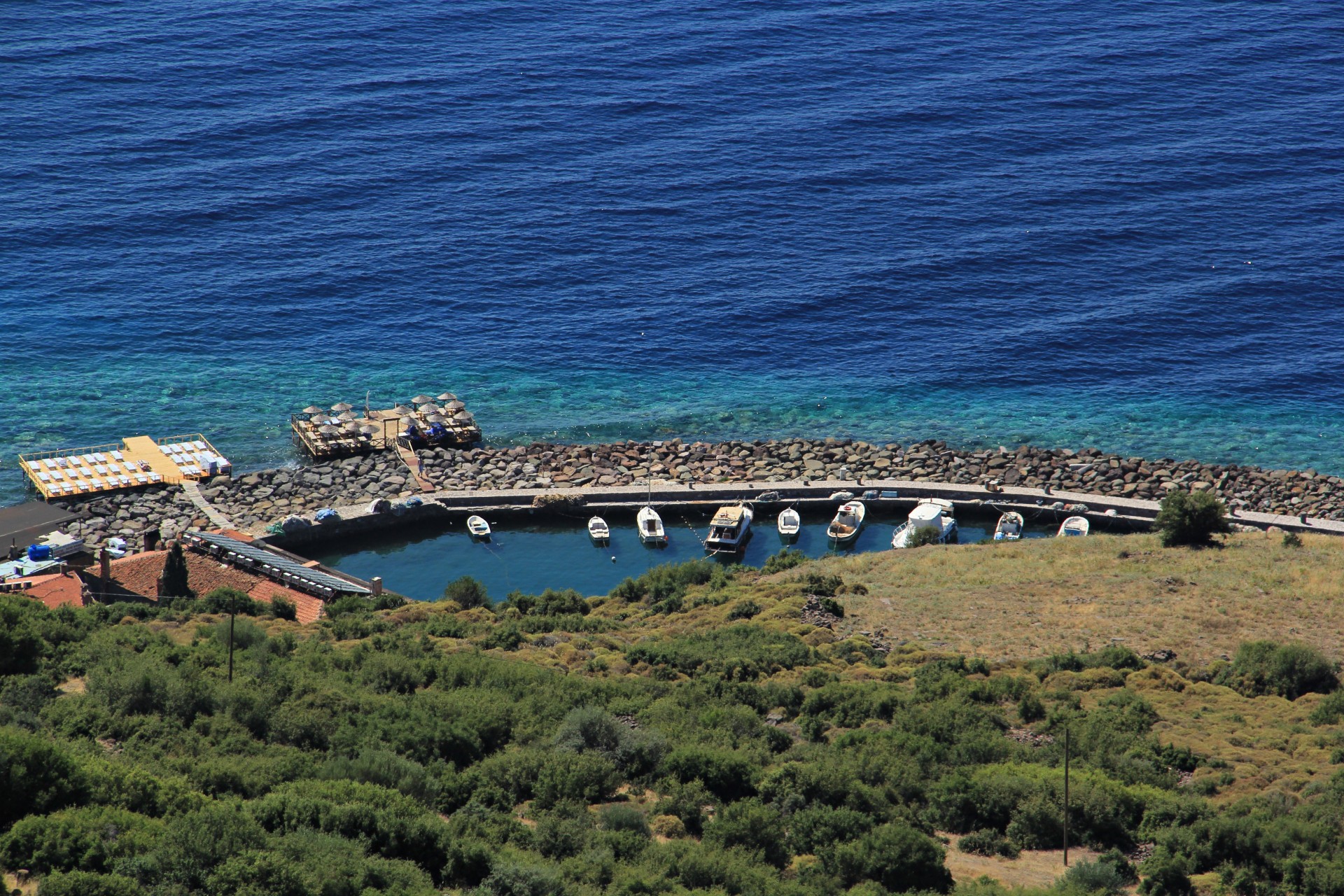 Assos or Behramkale (Behram) is a very small town located at the Ayvacık district of the historical city of Turkey, Canakkale. Actually Assos is an ancient Aeolian city and a fishing village that its history goes back to the Bronze Age. If you are looking for a place to spend your time in nature and a more quiet location, the answer is probably the Assos. Because the number of people visiting here every year is much less than other popular destinations like Antalya, Muğla and İzmir. Only those who know Assos come to Assos 🙂 Let’s continue to read more about this unique park of western Turkey. You can use the table below to read the topic you want.

As I told you above this region is one of the most historic places in Turkey. There are some pieces of evidence found from the archaeological excavations that show the history of the region dates back to the Bronze Age. Methymians who are originally lived at the Lesbos Island founded Assos around the 7th century BC. Lydians and Persians controlled the city, especially during the Classical Age. Around the 300 BC, city ruled by the famous banker Eubolos. After the reign of Eubolos, his slave Hermeias took the management of city. There is another important information about the other and many people don’t know it. Hermeias who was the student of Plator invited many famous philosophers to the Assos to found an academy. After that Aristotle, Xenocrates, Erastus, Coriscus, Theophrastus and many more come from Athens to found the academy in 347 BC. Are you ready for a gossip? 🙂 Aristotle married Pythias who was the niece o Hermeias. After that, he lived in Assos for three years. Also, he opened the School of Logical Thinking.

I can say that the golden years of Assos ended by the arrivals of the Persians. The was conquered by the Persians in 334 BC and their great king of Macedonia, Alexander the Great. The city lived under the Pergamon rule until the 133 BC and then the Roman Empire took control of the city. Roman Empire and then Byzantium Empire‘s reign continued over the region from 395 to 14th century. Young Ottoman state conquered the Assos and Canakkale region around the 14th century. Assos’s richness came from the ancient are still under the protection of the Turkish government. You can visit the Acropolis, temples, city walls theatre ruins and more even today.

Assos is located at the Canakkale, the western city of Turkey. Canakkale has many quiet, peaceful and intertwined with nature small villages. From Canakkale, you need to drive around 85 km (60 to 75 minutes) to get the Assos. Like the many place in Canakkale, Assos very quiet place. The main reason behind this, people loves the southern part of Turkey and there a more direct flight to the Antalya and Izmir. If you want to go to the Assos you need to fly Canakkale from Istanbul. Also, you can take a bus to the Canakkale and then Assos from the main coach station in the city. If you are directly coming to Istanbul, my suggestion is to rent a car. Because the route from Istanbul to Assos would be stunning for you. Just take this route, you have 3 options and each of them would be a very nice journey. If you have any question about how to go to the Assos, don’t forget to ask them in the comment section.

What to Do in Assos?

Despite being a small town, based on my experience there are tons of thing that you can enjoy in Assos. I want to start with the beaches at first. Because there are a couple of beaches both in the centre of town and nearby places worth to swim. Because unlike the popular beaches there won’t be lots of people, cafes or something else, just pure nature.

I can separate the list of the beaches into the two; close to the centre and the others. If you are looking for a beach with some facilities and places to eat you should stay in the centre. There are two beaches you can enjoy; Kadırga Beach and Harbor (Liman) Beach. Kadırgar Beach is the biggest one in the region. It is 2 km away from the Assos and has many places to stay. Assos Harbor (Liman) Beach is smaller than the Kadırga Beach and doesn’t have lots of sunbeds or etc.

You can find the other beaches around the Assos in the list given below;

Behramkale is a village with the preserved historic fabric. Also, Behramkale is under the protection of the Turkish government by-laws. In Behramkale you can see the Greek-style stone houses, Albanian street and many more things came from the history of the region. Today there are couple small businesses and boutique hotels at the Behramkale. Don’t forget to visit these places during your time in Behramkale;

The ancient city of Assos founded in the 6th century over the volcanic hill. Ancient City was important to place for the Anatolia. Because many sarcophagi made in this city and they were very famous among people. These sarcophagi were also known as the “human eaters” because body decorated very quickly. The city was also important because of the philosopher Aristotle lived a period of time and founded a school of philosophy. The Temple of Athena, located at the highest point of the city, is named after Athena, the daughter of Zeus and one of the 12 gods of Olympos. Athena is the guardian goddess of the city. Being the first and only Doric temple built in Anatolia, the building attracts attention with its extraordinary view. In Assos, you can also see the Roman antique theater, agora, necropolis (cemetery) and city walls. Assos Ancient City is opened during the year for the visitor and the entrance fee to the site is around 25 Turkish Lira. Don’t forget to tale look to the video below.

How to Go to Assos?

In this part, you can find your options to go to the Assos from the different cities in Turkey. Don’t if you don’t rent or bring your car it may be hard to get around in Assos. So my suggestion is to use your own car.

If you are looking for a coach to go to the Assos you should know that there are many buses directly to the city. So you should go to the Canakkale, Ayvalık, Edremit or Ayvacik and then take minibuses to the Behramkale or Assos.

You need to take a road around 460 km from Istanbul to reach this unique town. It will take around 6 to 8 hours depending on the traffic. Also, you can take the ferries to get directly to the Bandırma from Istanbul which is quite a good trip with a nice sea view. You can find the distance between the major settlement around the religion and Assos.

I hope that you like the information you find in this guide about Assos and Behramkale. If you have any question in your mind please ask them in the comment section. Also, don’t forget to share your opinions, experiences, thoughts and suggestions about the Assos to improve the content and quality of this content. Have a nice journey and holiday!