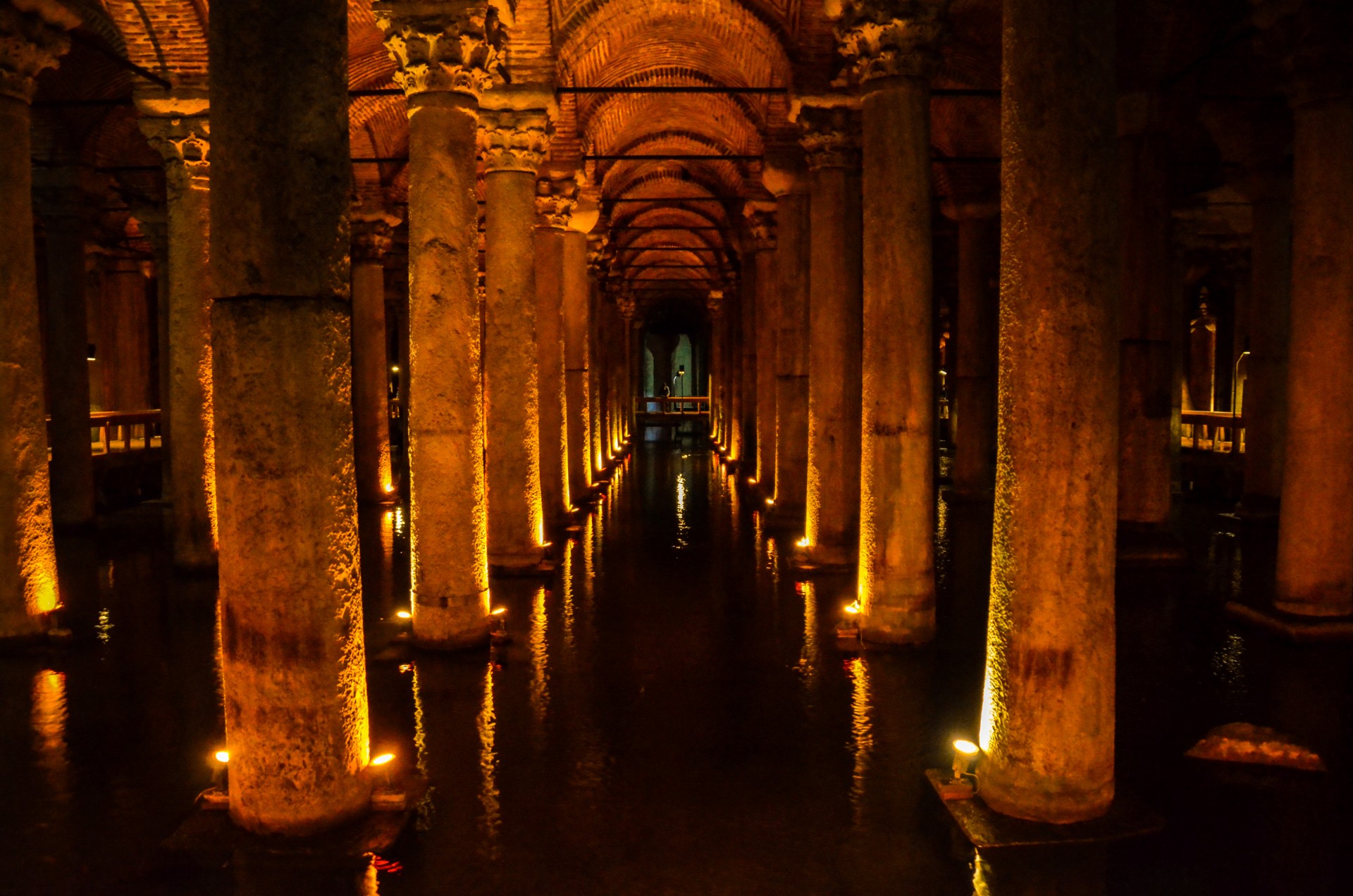 Basilica Cistern: Hidden Beneath the Istanbul

Basilica Cistern is maybe on the top of the must-to-see list in Istanbul city guide. This amazing historical building located very close to the Hagia Sophia and Blue Mosque. Yerebatan Sarnıcı (in Turkish) or Basilica Cistern is basically a large underground cistern that is built by the Byzantine Emperor Justinian I between 527 and 565 as a water supply for the Constantinople.

Basilica Cistern’s history dates back to the earlier time of the Byzantine Emperor Justinian I. Construction of the cistern took around 38 years between 527 and 565. This massive underground cistern or water reservoir is 140 meters long, 70 meters wide. The shape of the cistern is rectangular. You can reach it through the 52 step staircase. Basilica Cistern also has 336 marble columns and each of them is 9 meters high. There is a 4.80 meters apart from each column. Columns are located with 12 rows, each of the rows also has 28 columns. Basilica Cistern can hold more than 100.000 tons of water. By the way, In Turkish cistern calls as you know Yerebatan Sarnıcı, also Yerebatan Cistern, Cisterna Basilica or Basilica Cisterna.

Expect very few edged columns, the majority of them have a cylinder shape. On the northwest edge of the Basilica Cistern, there are two Medusa Head, which are quite impressive examples of Roman architecture. Medusa Heads are a very important part of the Basilica Cistern history and yo should or even have to know something about them. Most of the visitors of the cistern are coming to see the Medusa Heads but their history actually unknown and a little complicated. Largely accepted thought about the Medusa Heads that they have taken to the cistern beginning of the construction to support the foundation but the truth is still mystical.

Now, it is time to tell the legend of the Medusa! Medusa is one of the three Gorgonas that are the female monsters of Greek mythology. Those Gorgonas were living the underground. The snake-head Medusa, one of the three sisters, has the power of gorgonizing whoever looks to her. Because of her power they put the head of her to protect the cistern.

There are of course other stories about Medusa Heads in the Basilica Cistern. Medusa was a girl who boasted for her black eyes, long hair, and beauty. Medusa fell in love with Perseus, son of the great god Zeus. At the same time, Athena also was in love with Perseus and this made Medusa very jealous. Athena turned the long hair of Medusa into the snakes. After that, anyone who ever looked to the Medusa turns to the stone. While later, Perseus headed off the Medusa and beat his enemies with her power.

There is a really interesting story about Basilica Cistern. Between 1544 and 1550, a Dutch traveler, P. Gyllius came to Istanbul to explore the Byzantium remain around the city. One day, Gylius was walking around the Hagia Sophia and managed to enter the Basilica Cistern with a torch through the stone steps of it. He saw a wooden backyard building in front of a very large underground cistern. He told that the people were pulling the water from the large round holes from their ground floor of the houses and even fished there. During his expedition, Gyllius identified each column of the cistern and published them on his travel book. Gyllius influenced many other travelers with his time in Istanbul.

Renovations of the Basilica Cistern

Basilica Cistern (Yerebatan Sarnıcı) is a very old building. Therefore, it has been renovated a couple of times throughout history. During the Ottoman Empire, Kayserili Ahmet Aga who was an architect repaired the cistern at 1723 by the order of the Ahmed III. There was another repair during the Sultan Abdulhamid II reign.

8 column in the front of the northeast wall covered with thick cement layer during the repair works between 1955 and 1960. These columns cemented because of the risk of them breaking during the construction. This unfortunate thing causes them to lose their original appearance and texture. In time very famous word leaders also visited the Basilica Cistern like Bill Clinton USA Former President, Wim Kok Netherlands Former Prime Minister, Lamberto Dini Former Minister of Foreign Affair of Italy, Göran Persson Former Prime Minister of Sweden and Thomas Klastil Former Prime Minister of Austria.

Where is Basilica Cistern?

Basilica Cistern (Yerebatan Sarnıcı) is located at the historical peninsula of Istanbul, very close to the Hagia Sophia. This area is also known as a Sultanahmet district where is the home of the numerous historical places of Istanbul. The entrance of the cistern is on Yerebatan street. You will see the signs to the entrance named Yerebatan Sarnıcı. It is very easy to find the cistern.

How to Go to the Basilica Cistern?

You can take a walk from the Eminönü ferry stop. This walk probably will take around 30 minutes. Because there are multiple places to see through the way. Also, it will be a little tiring for you because you need to go to the uphill. But you can take the tram, of course, you can use the T1 (Kabataş-Bağcılar) tram line to go to the cistern. You just need to get off at the Sultanahmet station where is very close to the cistern. You can take a look at the timetables of the T1 tram line from the Metro Istanbul website.

The cistern is open seven days a week. Only on the first day of the Islamic religious holidays, it opened at 13.00. Visiting hours are between 09.00 and 17.30. Ticket prices for visiting the cistern various if you are Turkish citizen or tourist. Unfortunately in Turkey, for some places there different pricing for a tourist like in here.

While your time in cistern don’t forget to do things written below;

Please share your comments and suggestions to improve this Basilica Cistern (Yerebatan Sarnıcı) guide to help the people who are thinking or planning to visit it. If you have a question about the cistern feel free to share them in the comment section.