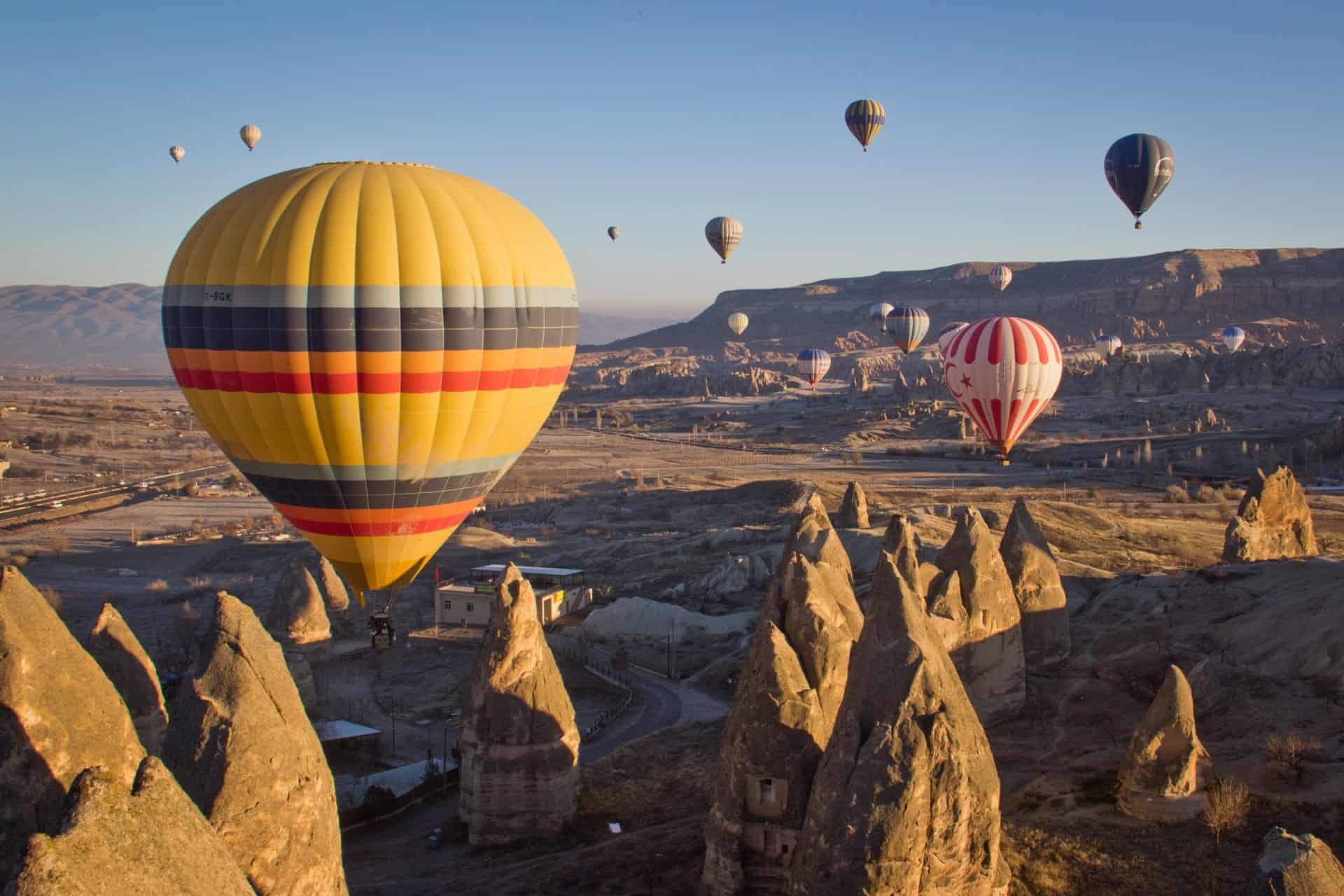 Cappadocia region is a very uniques place where nature and history unite with each other in the most beautiful way in the world. One of the most touristic regions of Turkey, Cappadocia comes into existence after the millions of years of rain and wind that eroding the soft layers formed by the lava and ashed erupted by Erciyes, Hasan and Gullu mountains 60 million years ago. In this comprehensive Cappadocia guide, you will find everything you need about these mystical places. On average, every year more than 3 million people are visiting the Cappadocia and surrounding regions, Urgup, Goreme National Park, Avanos, Goreme Open Air Museum, Nevsehir, and Kayseri. You can check the interactive map about this post given below to see all the information given in this post. Let’s go and visit Cappadocia!

Cappadocia is not just a place to visit or see. Visiting this region is a totally different experience. You may visit countless cities, buildings or parks but Cappadocia is not like anything else. It has its own world. Are not you get excited just watching the video about the Cappadocia which is only 2 minutes long? Also, more than 3 million people who are visiting here every year can’t be wrong, right? Just get ready yourself, there are tons of things to do in Cappadocia; horse tours, hot air balloon tours, pottery making, wine tasting, valley tours, underground cities and more…

Cappadocia is located at the center of the Anatolia, very close to the Nevsehir (15 km) and Kayseri (70 km) city center. Generally, Cappadocia refers to the region which includes not only the fairy chimneys but also the Goreme National Park, Sultansazligi National Park, Urgup, Avanos, Hasan and Erciyes mountains, Kayseri and Nevsehir. Among the traveler’s the region knows as the Cappadocia because of that I will refer it the same way. You can check the interactive map to see where you need to go for things you want to do.

How to Go to Cappadocia?

It is quite easy to go to Cappadocia. It totally depends on your choice, you can go there by taking a flight, bus or renting your own car. If you want to do it in a quick way there two airports that are very close to the region; Nevsehir Cappadocia Airport and Kayseri Airport. You can find daily flights to both of them from the multiple airports in Turkey, especially from the Istanbul Airport and Istanbul Sabiha Gokcen Airport. It is possible to buy a connected flight to Nevsehir Cappadocia Airport and Kayseri Airport if you buy your tickets from Turkish Airlines or Pegasus Airlines. Probably you won’t find any foreign airlines that flying to these airports. From both of the airports, there are regular shuttles to the city center. That means you can avoid taking a taxi from the airport to the city centers.

Your second option to go Cappadocia is taking intercity buses. There are tons of buses that are going to the Nevsehir and Kayseri from the cities of Turkey. So, there is no need to list buses or companies. But I can suggest you to choose Kamil Koc, Pamukkale, Anadolu companies to buy your tickets which are the best ones in Turkey. Besides the flights and buses, my favorite is the car. From Istanbul, a car ride to the Cappadocia which is about 800 km. That will be quite an adventure for you. You can follow this route to go to the region. If you can share a couple of days for this route you can visit the cities are on your route.

When to Visit Cappadocia?

The best time to visit the Cappadocia is during the spring and summer. Because in winter, the region is quite cold, minus zero. Also, there will be lots of snow. Especially between June and August, it will be very crowded. So it is better to choose between April-May and September-October. In this way, at least you may avoid the high number of local tourists.

How Many Days Do You Need to Visit Cappadocia?

Well, I think that 3 or 4 days would be enough for a full Cappadocia experience. But it is always better than to decide about the length of your visit. If you ask me how long will you stay there, I will probably say a week. Because I’m a calm person who is enjoying the nature and silence. But if you are young and full of wild 3 days would be enough to do everything. You will find the best answer when you finished reading this post.

Where to Stay in Cappadocia?

The best and major places that you can stay during your visit; Urgup, Ortahisar, Goreme, and Avanos. I’m not suggesting you stay in Nevsehir or Kayseri city centers. Because you came to the feel and experience nature, right? Most of the people stay at Goreme or Urgup. Especially in the cave houses converted to the hotels. Wherever you stay don’t worry about the transportation there are shuttles all around the Cappadocia.

The largest and biggest settlement in the Cappadocia region is the Urgup. There are very few fairy chimneys or cave houses in Urgup but still offers lots of places to stay. Also, the restaurants which offer traditional Turkish cuisines are quite good.

Your first choice for accommodation can be Goreme where is the closest place for the balloon tour and Goreme National Park. There are also lots of cave houses to stay in. Also, Ortahisar is the other location you may stay where is quite similar to the Goreme.

If you are looking for a more modern place to stay, Avanos can be answered to that. There are lots of pottery studios in Avanos. Also, the Zelve valley is only 3 km far away from Avanos. There are a couple of places to see in Avanos district and you will find them below.

What to Do and See in Cappadocia

There are so many things to see and do in Cappadocia. As you know when some refer Capadocia region it includes Goreme, Urgup, Avanos, Ortahisar and a couple of other settlements. I tried to list the top attraction should be made and places to be seen during your time in Cappadocia. If you have only one day for Cappadocia and want to have a full experience as possible please take look to this Cappadocia Red Tour: 1-Day Excursion from Goreme. That tour will last around 8 hours which is quite long and enough to see the major places in the region. Also, the tour includes;

There are various different tours, check the widgets below. You can buy your tickets from GetYourGuide.com in advance. Please continue to read to have the most extensive list of the Cappadocia. Also, you will find everything in this post on the interactive map.

At each ballon, generally, there will be 8 to 24 people. If you have lots of money, of course, you can rent your own private balloon. Where ever you stay in Cappadocia, Goreme, Urgup or Avanos there will be agencies that selling the hot air balloon tour tickets. But the majority of them are Goreme located. Probably I will write another post just for the Cappadocia hot air balloon tour in the future. Ticket prices for hot air balloon tours vary by the demand and the season but my suggestion to use the widgets below to buy your tickets in advance which always more and better than buying the tickets from the venue.

If you want to see the wonderful settlement with houses caved in rock Goreme Open Air Museum is the place for that. There are tons of cave houses and also religious buildings like churches and monasteries. Within the Goreme Open Air, you can visit Yilanlı Church, Elmalı Church, Karanlik Church, St. Basileus Church, St. Barbara Church, Carikli Church, Tokali Church, Girls and Boys Monastery. Also, there are dining halls with long tables made from stone should be seen. Opening and closing hours of the Goreme Open Air Museum depend on the season. You may find the information in the table below.

Cappadocia is also famous for its pottery making workshops. You may discover the artist within you while you are trying to make a potter from clays. You will use a setup which name is chez in these workshops. Trying to give shape to it which can be used as a bowl or something else really challenging experiences for anyone. You will find pottery shops in Goreme, Urgup, and Avanos but the most famous ones are in Avanos.

Generally, when you go to the pottery shop they will give brief information about the history of pottery making and help you to make a basic one. Also, there are a couple of small museums in Avanos about pottery history and clay products. My suggestion to visit the Guray Ceramics Museum which is the famous one. This museum belongs to a family who is in the pottery business since 1843. You can check the video below to see what will you encounter 🙂

It is possible to increase your adrenaline level in Cappadocia. The meaning of Cappadocia in Persian is the “Beautiful country of Horses“.  Horse riding safari tour is becoming more and more popular every year. To join the horse safari tour you don’t need any experience with horse riding. You don’t need to worry about your security because tours are well organized and help you with everything during your ride, even your kids can ride horses. Generally, all of the horse safari riding tours follow the same route with small differences. You can buy your safari tickets from your hotel or from the agencies in the Goreme, Urgup or Avanos city centers.

Don’t Forget to Bring These!

I’m strongly recommending to bring a couple of things to the Cappadocia with you. The first one is sun cream. Cappadocia may not be near the sea but you can get a sunburn. However, buying a straw hat will be a good idea to avoid the heat and keep the shadow.

In this comprehensive Cappadocia guide, I try to summarize everything you need while your visit. Each part of this post deserves its own post with more detail. I will continue to write to each one of them. However, don’t forget to check the Cappadocia interactive map! Please share the experience and comments about the Cappadocia in the comment section!