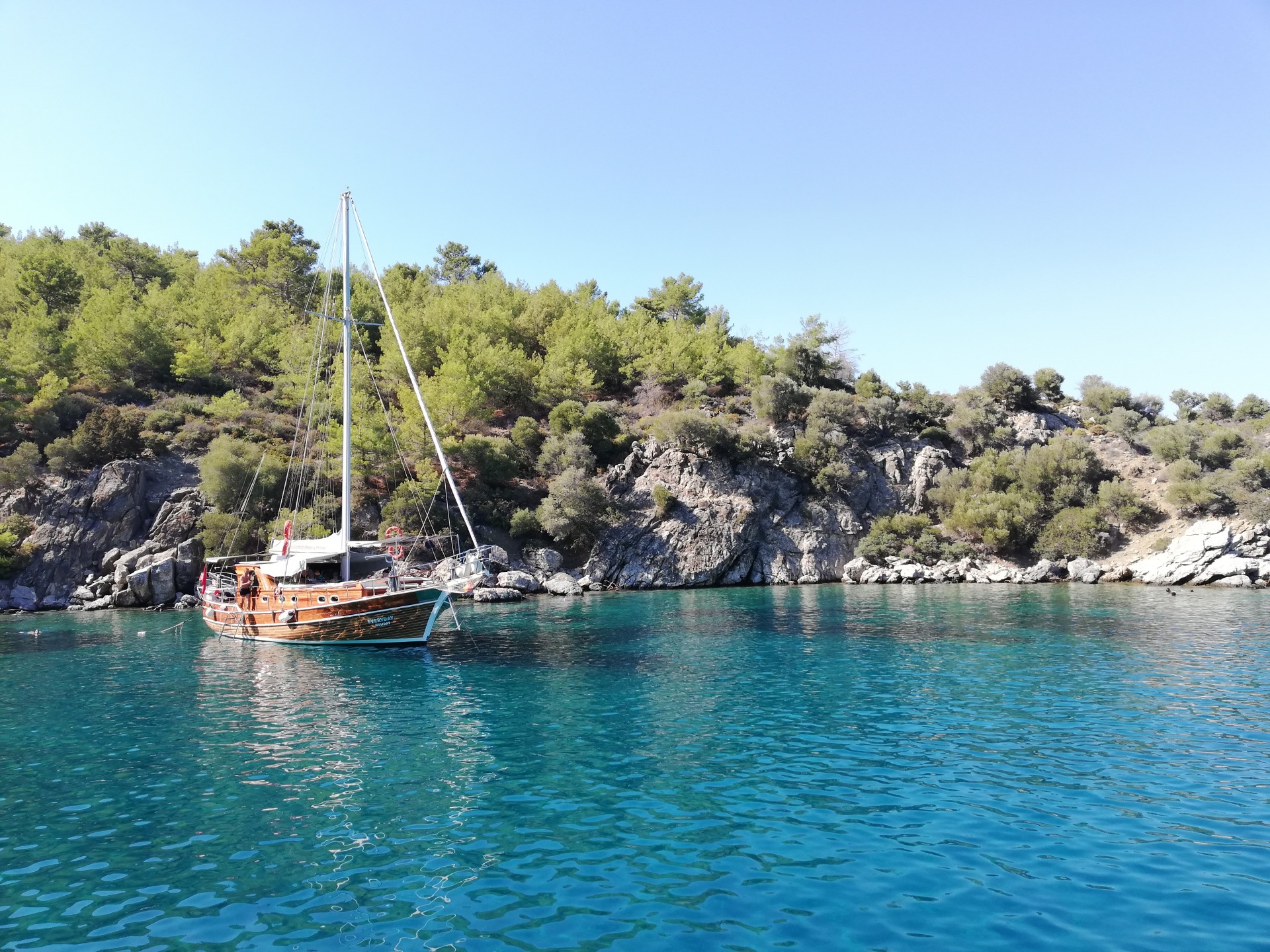 Where is the Datca Peninsula?

This map will be updated within couple of days.

How to Go to the Datca Peninsula?

If you want to go to Datca, the shortest way is taking a flight to the Dalaman airport and arranging a private transfer to the Datca. Of course, there are multiple intercity bus lines to the Datca from major cities of Turkey like Istanbul, Ankara, Izmir, Bursa, Eskisehir and more. But keep in mind going to Datca with bus takes at least 12 hours from Istanbul. Also, don’t forget to arrange your transfer before your arrival and get confirmation about it.

Where to Stay in Datca Peninsula?

Datca isn’t a big place. Where you stay ou will always be close to the beaches. I stayed at Bademli Konak Hotel once and it was quite fine, the price for the bed and breakfast. The hotel was just 5-10 minutes’ walk away from the beaches which is great. If you book a hotel very close to the beaches get ready for the noisy night. I’m strongly suggesting booking a hotel like this one. There are two beaches in Datca, Taslik and Kumluk beaches, so it is better to stay close to them, check the map above!

If you are looking for more quiet and alone time in the Datca Peninsula, of course, there are different places to stay. You can check places from booking.com to find a place to stay at Emecik, Kızlan, Resadiye, Karakoy, Mesudiye, Yaka and Yazikoy. These are all small villages. So, don’t expect a five-star hotel quality places to stay. You will find couple of small lodgings runs by the local families. But the food especially breakfast will be fascinating. Because most of those local families grow their own food, not chemically exposed and mutated.

If you coming to Turkey from a country where its currency higher than Turkish Lira like Euro, Dolar or Sterlin I’m strongly suggesting you rent a car from Dalaman airport and be your own driver. Because at the Datca Peninsula there are so many places to see it is always better to have your own car. There are a couple of worldwide known car rental companies at the airport so it not a problem. You can use your car except for going to the Knidos Ancient City. Because there is a better way to go there 🙂 Just wait a bit longer and continue to read 🙂

When to Visit the Datca Peninsula?

The temperature at Datca Peninsula is between 22 to 32 Celcius between May and October. Generally, a local tourist spends their holiday in July and August. So these months will be very crowded. It will better for you to plan your trip to Datca on May-June or September-October. As long as you booked in advance there won’t be any problem but the traffic will be mess between July and August especially within the city center and Marmaris road. You can check the Datca weather information from here.

Places to See in Datca Peninsula

You will now understand why you need to rent a car during your time in Datca. One side of the Datca Peninsula is the Aegean sea and the other side of it is the Mediterranean sea. I’m writing the list of the beaches below you can find the position of all on the map of the post given above.

There is not even a single factory or processing plant at the Datca Peninsula. That means no pollution, just nature. Each of the places on the list given above is a perfect place to spend a day. Trees, sun, nature and more, even you can camp at any of them except Knidos Ancient City. You will find facilities for food and drink, also for the toilet. Probably no one will overcharge you try to scam at those places. As I told you before the Datca Peninsula is the hidden heaven of the Turkey and not very popular, yet…

You will see the Kizlan Windmills while you are going to the Datca center. They will be on your right at the Kizlan village junction. There are a couple of windmills on the Kizlan village and some of them are waiting for renovation. If you rent a car to come to the Datca turn at the Kizlan junction and visit the Kizlan windmills. All of the windmills are owned by the people. That’s why they are still waiting for renovation. But one of the bough by the Datca Governorship renovated and rent it to the private person to build a cafeteria for the visitors. You can visit the windmill and see the operating system of it. You can also visit the partly damaged ones but always be careful. They can be collapse anytime.

I just want to give you a brief history of the Knidos. Because I always believe that knowing something about a place before you will help you to understand and live the discovery experience better. Knidos, where is also known as Cnidus, was a Greek city of ancient Caria. It was also the part of the Doric or Dorian Hexapolis. It is believed that the first foundation of the Knidos was very close to the Datca city center around 4th century BC.

When you go to the Knidos Ancient City you will and you may see on the video above it is located on a located where is the passing point between Agean and Mediterranean sea. Historians believe that there was a bridge over the see to reach the Tekir Peninsula (Cape Deveboynu or Cape Krio). But today this passage is full of soil and you can directly to the Cape. You will also see two harbors at the Knidos Ancient City one of them is small and the other one is bigger.

I don’t remember where but I read that the population of Knidos Ancient City may be up to 100.000 people during its peak. Even during the Byzantine rule over the area, it was possible that there was a serious population because many Christian remains found over the site. Artemidorus, a minor character in the Shakespeare play “Julius Caesar”, was from Knidos. Also, Eudoxus, the astronomer, Ctesias, the writer on Persian history, and Sostratus, the builder of the celebrated Pharos at Alexandria, were also the most remarkable of the Knidians mentioned in history.

Excavation and Loot of the Knidos Ancient City

The first expedition to the Knidos Ancient City carried out by the Dilettante Society in 1812 and the excavations started by Charles Newton in 1858 under the allowance of the Ottoman Empire. Most of the historical artifacts found on these excavations stolen by Newton and taken back to the United Kingdom. He also even given a sir title after this mission. You can see the Lion of Knidos at the entrance of the British Museum. I always believe that the artifact like this should be given back to its original country and let be seen in their original place.

How to Go to the Knidos Ancient City?

You have two ways to go to Knidos Ancient City. The first is to rent a car if you are not already rented one follow this route. Route signs will help to find the Knidos Ancient City and the trip will take around 1 hour and 35 km. But I’m strongly suggesting to take the second option, from the sea! Yes, from the sea 🙂 You can join the daily boat tours departing from the Datca center. I marked the departure point on the map above. There are several boats leaving from Datca harbor and stops at a couple of coves and lets you to swim for a half-hour then moves to the next one until you arrive at the Knidos Ancient City. If you have enough money you can even rent your own boat to go where you want, not only Knidos Ancient City. Generally, boats leave around 09.00 and comebacks around 18.00. So you should spare a day for this attraction. As you can see from the video below joining a boat tour would be a great idea 🙂

There two types of boat tours; short and long tours. Yours should be the long tour to go to the Knidos Ancient City. Prices vary every summer but it should be around 80-100 Turkish Lira per person. They will also offer you a lunch included with the ticket price but not the drinks. Lunch will be fish or meat and pasta. It is also free to bring your own foods and drinks but they won’t allow using their refrigerator 🙂

Things to See in the Knidos Ancient City

Because of the geographic properties of Knidos, the city was built step-by-step and there were terraces on each step and the Dionysos terrace is one of them. The second one is Liman avenue. From the staring of the 4th BC, Knidos started a new type of urban planning system. Based on these systems they built seven avenues from north to south and all they merged with one main avenue from west to east. Liman street is the first one of the north to west avenues. Also, there is a chapel at the west of the Liman street which should be seen.

You will also find the remains of the Karneios Karneios Karneios at the middle terrace located at the intersection of the West to East avenue and Liman Avenue. It is possible to see the Altar and other structural remains of the Apollon Karneios Temple. There are of course other important things to see but I’m leaving them to you 🙂 Also you can buy almonds and natural soap from the local villagers around the Knidos Ancient City. You will see them as soon as you get off from the boat.

Things to Do in the Datca Peninsula

If you are planning to visit the Datca Peninsula and Knidos Ancient City I hope that this post will be helpful for you. Please share your questions and thoughts in the comment section to help others. Also, don’t forget to share this post with your friends 🙂