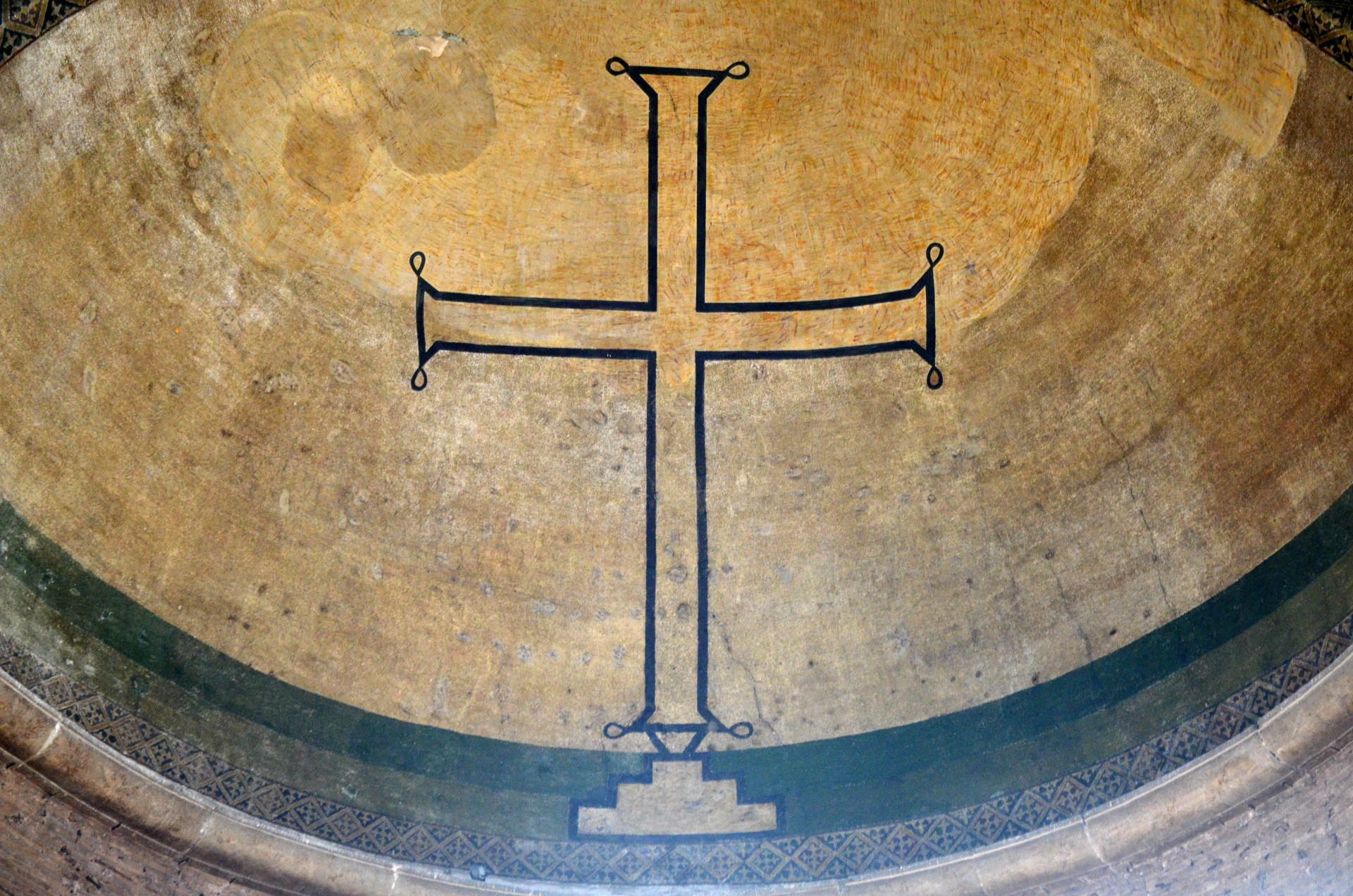 Hagia Irene (Hagia Eirene) is an Eastern Orthodox church where is located on the outer courtyard of the Topkapi Palace in Istanbul. This centuries-old unique icon of Istanbul is also known as Saint Irene. The meaning of the place means the “Holy Peace”. If you are in Istanbul and planning to visit Hagia Sophia or Blue Mosque, I’m strongly advising to stop at this iconic building. Hagia Irene one of the churches that not converted to a mosque after the conquest of Contantinopolis by the Fatih the Conquer. Today, the places serve as a museum and concert hall. You check below to take a look at what will you read on this post. Also, if you are looking for more to learn about Istanbul, please take a look at the Istanbul city guide and Istanbul city tours posts.

Hagia Irene means “divine peace” or “holy peace” in Greek. Based on the meaning of the phrase you can easily understand that the church was dedicated to God. Bu t most of the people presume that the church was dedicated to Saint Irene which is quite wrong. The construction date of the church is not known clearly but the archaeological and historical evidence shows that it was built in around 4th century AD over the ruins of an old pagan temple. Hagia Irene was built by the Byzantine Emperor Constantine I who was also knowns as the Constantin the Great.

At first, the church was made using woods but during the Nika Riot in 532 AD. During the Nika Riot, more than 30.000 citizens of Constantinople lost their lives. It was like a clash of the four different factions in the capital. We should talk it on another post. After the fire, Hagia Irene renovated by the Justinian I with typical early Byzantine architecture. During over the years, the church was damaged by multiple earthquakes and fire but it is still standing at the heart of the Istanbul even today.

After the conquest of the Constantinople by the Ottoman Empire in 1453, it was used by the Janissaries who were the mighty warrior of the army as an arsenal. The Ottomans added staircases inside church and inscription on the entrance gate. From the beginning of the 19th century, the church started to use as a museum for exhibitions of the old weapons. Hagia Irene stayed empty at the beginning of the 20th century until the restoration works. Today, it is a popular tourist spot where you can visit every day. If you compared Hagia Irene to the other magnificent building around it, it still has lots of history to offer you at least like them.

Hagia Irene located on the spot of old pagan, pre-Christian temple. It was also the 1st church of the Constantinople. Maybe you don’t know that it built before the Hagia Sophia! Hagia Irene is also the witness of the transition of Constantinople from Greek trade centre to the capital of the Eastern Roman Empire. A couple of renovation made through history in the church because of fires and natural disasters. After the big earthquakes on 20 October 740, Emperor Constantine V ordered the renovation of the church. During this renovation, the interior of the building decorated by the mosaics and frescoes. You can see some of them even today.

You can see an iconoclastic art in the Byzantium churches just like this one. The apse semidome and the bema arch of the church covered with beautiful mosaics. Also, you can see frescoes on the south side aisle. The history of these uniques arts dates back to the 8th century. In addition to all this, there is a synthronon. This structure is kind of rows of the built bench that arranged in a semicircle apse. During the religious liturgy, the clergy was sitting in here. Actually there are tons of words can be told and written for the architecture and art of the Hagia Irene but I think it would be better to discover them by yourself. Also, you can think to join some guided tour to maximize the efficiency of your visit to the Hagia Irene.

Constantinople conquered by the Ottoman Empire in 1453 by under the command of Mehmed the Conquer. After the conquest, Hagia Irene enclosed within the walls of the Topkapi Palace where was the headquarter of the entire Ottoman Empire. The church was used as an arsenal by the Janissaier until 1826. The building also served as a place to store the trophies of arms and military regalia taken by the Turks. Sultan Ahmet III who reigned between 1703 to 1730 converted the church to the National Military Museum in 1726.

After a more than a century, it was once more converted to another cultural spot by the Marshal of the Imperial Arsenal, Ahmed Fethi Pasha. From 1846, Hagia Irene started to serve as an antique military museum. Starting from the 1908 to 1978 building used as a Military Museum. Today, building is under the administration of the Ministry of Culture of the Turkish Republic.

Today, Hagia Irene is an important cultural point of Istanbul. Because regularly holds classical music concerts. Please take a look at the videos below. It is hair raising! Attending a concert at this holy place is one of the most beautiful experience you may ever have. Before coming to Istanbul please check the concert programs from the web to see the program schedule. However, please don’t forget there would be a dress code for the concerts.

Where is Hagia Irene?

Hagia Irene Church is located within the very heart of the historical peninsula of Istanbul. On Sultanahmet district their tons of holy, historical and iconic buildings like Basilica Cistern, Hagia Sophia, Blue Mosque, Obelisk of Theodosius, Milion Stone, Grand Bazaar, Rustem Pasha Mosque, Suleymaniye Mosque, and more… Sultanahmet is very close to the Eminonu and Karakoy district where are other historical districts of Istanbul. It is also very easy to go to the Sultanahmet because of its central location and extensive public transport over the area.

How to Go to Hagia Irene?

The historical peninsula of Istanbul is accessible by multiple public transport options. It is very easy to reach Sultanahmet Square and Hagia Irene. Because of this, I don’t recommend you to take a taxi or rent a car to go to the square. Also, you can join a guided tour to visit the church. Most of the tours will handle the transportation for visiting the historical peninsula of Istanbul. You have several options to go to the church. You will find each of them below.

It is not the easiest way but the most historical way to go to the Hagia Irene. This way is mostly for the people who are staying on the Asian side of Istanbul. You need to take a ferry from Kadikoy or Uskudar and get off at the Eminonu or Karakoy ferry stops. From here it is time to take a 20 min (1.5 km) walk. Your route will go through the history of multiple cultures periods of this lands; Republic of Turkey, Ottoman Empire, Byzantium Empire and more. You can take a look to the route from here. If the weather is not hot and suitable for taking an uphill walk I’m suggesting this way.

Sultanahmet station of the T1 tram line of Istanbul is located very next of the Sultanahmet square. It is very close to the Hagia Irene, the only a couple of minutes to walk. But please know that especially during the summer T1 tramline is full of tourist and local people who are going to/back from work. If you want to avoid the extensive crowd you may think to go to the Hagia Irene outside the rush hours. You can check the location of Sultanahmet tram stop from here.

Marmaray is the longest suburban rail line in the Istanbul serves between Gebze to Halkali. There is a big tunnel under the Bosphorus that connects the two sides of Istanbul. Every day thousands of people use this line. If you want to use the Marmaray to go to the Hagia Irene you just need to get off at Sirkeci station and walk to the Sultanahmet Square. The walking route is very similar to the ferry + walk option.

There are hundreds of tours that you can choose between Istanbul city tours. Uniquely specialized for the historical peninsula of Istanbul covers visiting the Hagia Irene. It is tough to find a private tour to visit this place, but the tours that you can see below will work you. Please don’t forget to read the user reviews before buying tickets any of the tours. Also, please leave your comment about those tours so I can change or give more information about them for the other people.

Please share your experinces, suggestion and thougt about Hagia Irene Church and Museum on the comment section. Your contribution will help me to improve the quality of this content. By the way, there are many more places to visit in Turkey. You can find all places where you can visit in from WeCityGuide | Turkey section.

When was Hagia Irene built?

The exact date is not precise, but it was built by Emperor Constantin I of the Eastern Roman Empire around 532.

Where is Hagia Irene?

It is located within the walls of the Topkapi Palace at the Sultanahmet district of the historical peninsula of Istanbul.

Is it worth to visit Hagia Irene?

Yes, yes and yes. It was the witness of countless historical event occurred this mighty lands. Visiting or joining a concert at the venue will be unforgattable experience for you.

How much the ticket price and entrance fee for the Hagia Irene?

The ticket price and entrance fee is 60 Turkish Lira per person. Unfortunately, Muze Kart (Museum Card) is not valid for the entrance.

What is opening hours of Hagia Irene?

Are there any more FAQs about Turkey?

You can check the FAQs About Turkey for Travel and Holiday page for more FAQs and insights about Turkey.