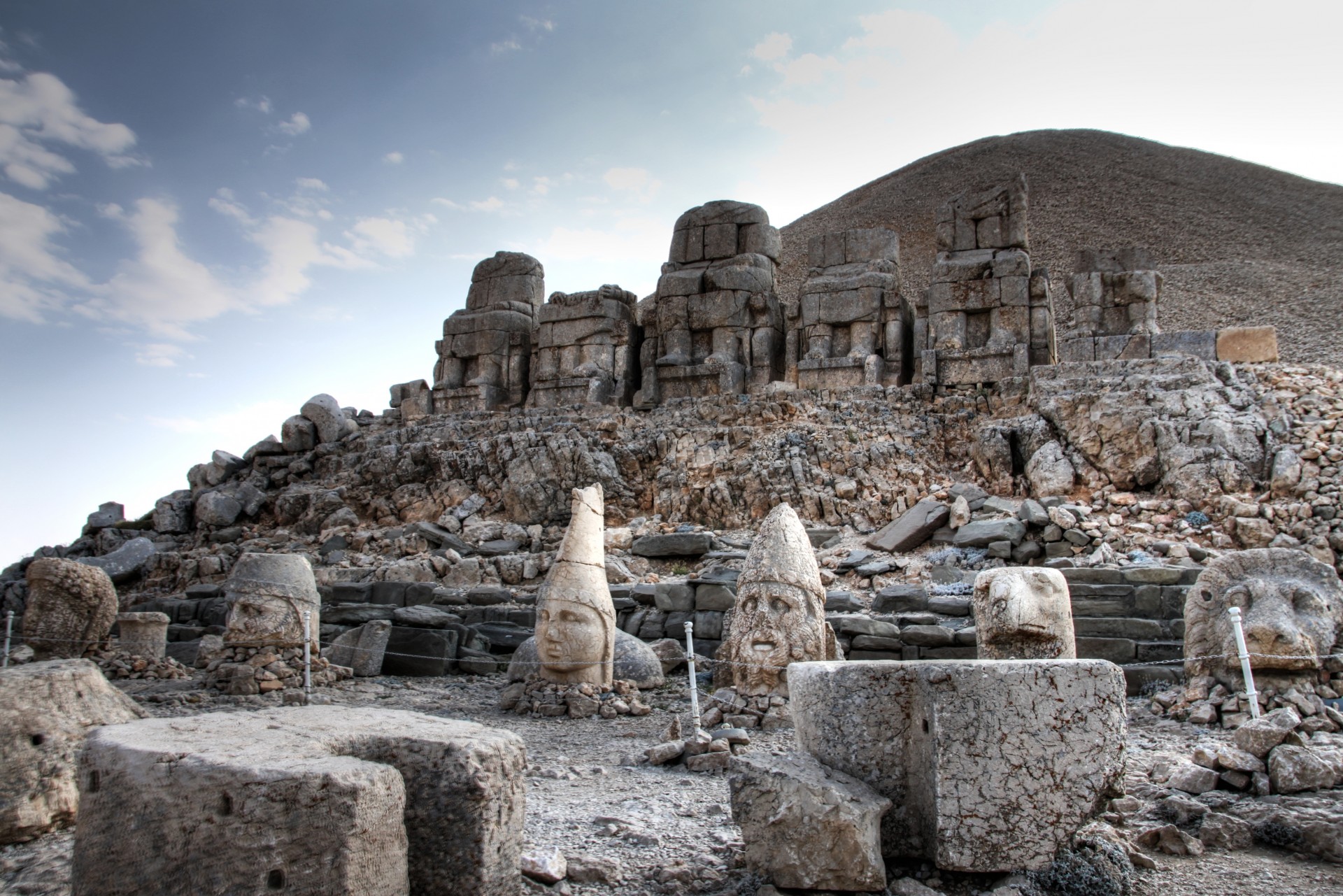 Mount Nemrut has been the subject of the legend since the ancient times, and a today is a place where attracts traveller all around from the world. This mountain is defined as a sacred and holy place by the Kingdom of Commagene where calls the people to join a mysterious adventure to explore the hidden secrets of the region. In this post, you will discover one of the underrated gems of Turkey, Mount Nemrut and its stone head where should be in your list to visit and witness to history. If you are looking for more to read about Turkey, don’t forget to check the WeCityGuide | Turkey category.

What is The Matter of Mount Nemrut?

Nemrut where is a volcanic mountain added to the UNESCO World Heritage List in 1987 as both a natural monument and human-shaped historical monument. Also, this mountain is a part of the Taurus Mountains belt and one of the most dangerous volcanic mountains may be active in future in Turkey. Its height is about 2150 meters and has stunning natural views through the region. Kingdom of Commagene ruled over this region around 1st century BC. They built one of the most magnificent ancient relics here, huge stone sculptures which keep their secret even today. You may watch an old video from the TRT (Turkish Radio and Television) to see Mount Nemrut footage.

Discovery of The Statues

The statues of the Nemrut discovered in 1881 during a road construction between Adıyaman and Diyarbakır. A German engineer, Karl Sester mentioned this place at first. After the punctuation of the Sester, German Royal Academy sent a team lead by the Otto Punchtein. Later then, Otto Punchtein translates a Greek written inscription and discovered that the region was under the reign of the Kingdom of Commagene. They also discovered the statues were built the King Antiochus I. The 2nd wave of the research and archaeological excavations held between 1953 to 1980 by the researchers from United States of America (Theresa Goell and Friedrich Karl Dörner), Turkey (Osman Hamdi) and Germany (Karl Humann). A significant part of the sculptures and inscriptions are waiting at the Mount Nemrut for its visitors. Also, you may see some of the relics from the region at the different museum around Turkey.

Where is and How to Go to The Mount Nemrut?

Nemrut is very close to the Kayadibi village of Kahta, Adıyaman. Adıyaman is the biggest major city in the region with Malatya. But if you are looking for a place to stay for a couple of days Adıyaman is the best choice because of its location and accessibility from the other parts of Trueyk. Nemrut is around 90 km away from the Adıyaman city centre. If you want to visit the Nemrut, you should go to Adıyaman first. There are a couple of flights from the major cities of Turkey to the Adıyaman. You can check the flights of Turkish Airlines, AnadoluJet and Pegasus Airlines. My suggestion for visiting the Nemrut is renting a car from the airport. Otherwise, you need to take public transport from Adıyaman to Kahta. And then, from Kahta you have to find a person who will take to the Nemrut and then… Never mind, just rent a car 🙂

King Clasped with Gods, Antiochus I.

To hold its community together and safe, Antiochus I. agreed with the Gods of the Anatolia. As proof of the holy agreement, he made several statues that representing this agreement around the Nemrut. You may the more than one of this king of statues around the Kingdom of Commagene, of course, one in the Nemrut. Pay your respects!

In total, there are 3 terraces at the Mount Nemrut. If you are looking to visit them all you need to spend at least an hour. Stone statues are at the east and west terraces at Nemrut. And a tumulus at the central terrace. The best-preserved terrace is the east one. Historical records show that there was a temple at the central terrace but today some of the stone head statues are in the exhibition over here. In here you may see the status of Lion, Eagle, Antiochus, Commagene, Zeus, Apollon and Herakles. Also, some of the head put back to its bodies in 2002. After this height of the statues reach up to the 8 to 10 meters.

These are the protective animal sculptures of the ancient Anatolia. They stood in pair at the beginning and end of the series of other statues and protects them. Unfortunately, only one pair of the four pair survived until today. Eagle, also symbolized the Kingdom of Commagene’s sky domination. It is also known as Zeus’s tool for delivering his commandments to the people. however, is the symbol of the domination of the Kingdom of Commagene on the mother earth.

Antiochos I. built his statues by the gods to gain dignity along with the holy gods. The head of the Antiochos discovers at the 2nd wave of the studies around 1953. The head found under the stone chips during another excavation. Maybe he was not along with the gods whole this time 🙂

The only and one female god statues along with the other ones. Commagene is the goddess of fertility. Commagene is located between King Antiochos and Zeus. You may notice the grapes and pomegranate motifs at the statues. There are symbolized virility. Also, there is an interesting story about this statue. Until 1963, the statues of Commagene was together with its base. But in the year of 1963, a lighting stroke it and its head fell. A sign from the Zeus, maybe?

The god of the gods, the big boss! Zeus is the highest-ranked god of all the gods. Zeus statue is located at the centre of the line. You may notice that it is bigger than the others. Also, if you take a deep look to its base you can see Zeus has a cape on his shoulder.

The son of Zeus and the symbol of the brightness and mind. Apollon is located just next to the Zeus. On his base, he is holding a branch in his hands. Also, you can see that he is wearing a tunic.

The last statue of the line. Herakles was a mortal and the son of the Alkmene symbolize the human struggle against nature. Herakles is holding a stick on his hand has a beard like Zeus.

This tumulus is a very big one. It looks like a peak of the mountain but it is the n-made grave of the king. It made by using more than 30.000 cubic meters of crushed stone over the tomb of the king. Mount Nemrut is intentionally chosen for this tomb. Because it is the closest place to the sky. You will understand this when you visit Mount Nemrut. It is not yet clear but the researchers are also thinking that there more than one tomb in here belong to the father of Antiochos, Mithridates and priests. However, the tunnel to the hearth of the tumulus is a long-standing mystery.

Nearby Places Where You Can Visit

Before finishing the guide for the Mount Nemrut its magnificent statues it may be helpful to give a bit of information where you can see very close to the Mount Nemrut and Adıyaman. Let’s discover the important heritage of the Kingdom of Commagene and the Roman Empire.

Arsameia Ruins is 60 km away from the Adıyaman and only 10 minutes of walk from the Nemrut National Park. Based on the inscriptions of the Antiochos I., Arsameis was the summer capital and administrative centre of the Kingdom of Commagene. During your visit please don’t forget to see the relief stele of Mitras and the Antiochos-Heraksles statues during a ritual. Also, there is the largest known Greek inscription just in front of it. However, don’t forget to go to the tunnel which goes to the 60 meters depth. You can take a look at the location of Arsameia Ruins from this link.

Karakuş Tumulus is a monumental tomb belonging to the women of the Commagene Kingdom, which is 8 minutes and 750 meters away from Nemrut Mountain. Due to the eagle sculpture in the column on the tumulus, which is about 20 meters high, the locals called this place the Karakus. There are bull and lion sculptures on the other columns, but only the body part of the bull statue has survived to the present day. In the west of the tumulus, King II of the Commagene King I. Antiochos. Mithridates has a relief that depicts the handshake scene with his sister Laodike. It is understood from the inscription on the column that the monumental tomb belongs to King Antiochos’ wife, Isias, daughter Antiochus and grandson Aka. Click for location. You can take a look at the location for Karakus Tumulus from this link.

Approximately 10 kilometres after passing Karakuş Tumulus, Cendere Bridge, Roman Bridge or Septimius Severus Bridge, located at the crossroads of Sincik-Kocahisar, was built on the order of the Roman Emperor Septimius Severus (193-211 AD). A magnificent monumental example of ancient Roman architecture, the bridge is 7 meters wide, 30 meters high and 120 meters long. The most interesting architectural feature of the bridge is that it was built without using any mortar. It rises in the form of a ramp on both sides and joins in the middle, adding both durability and aesthetic appearance to the bridge. You can take a look at the location of Cendere Bridge from this link.