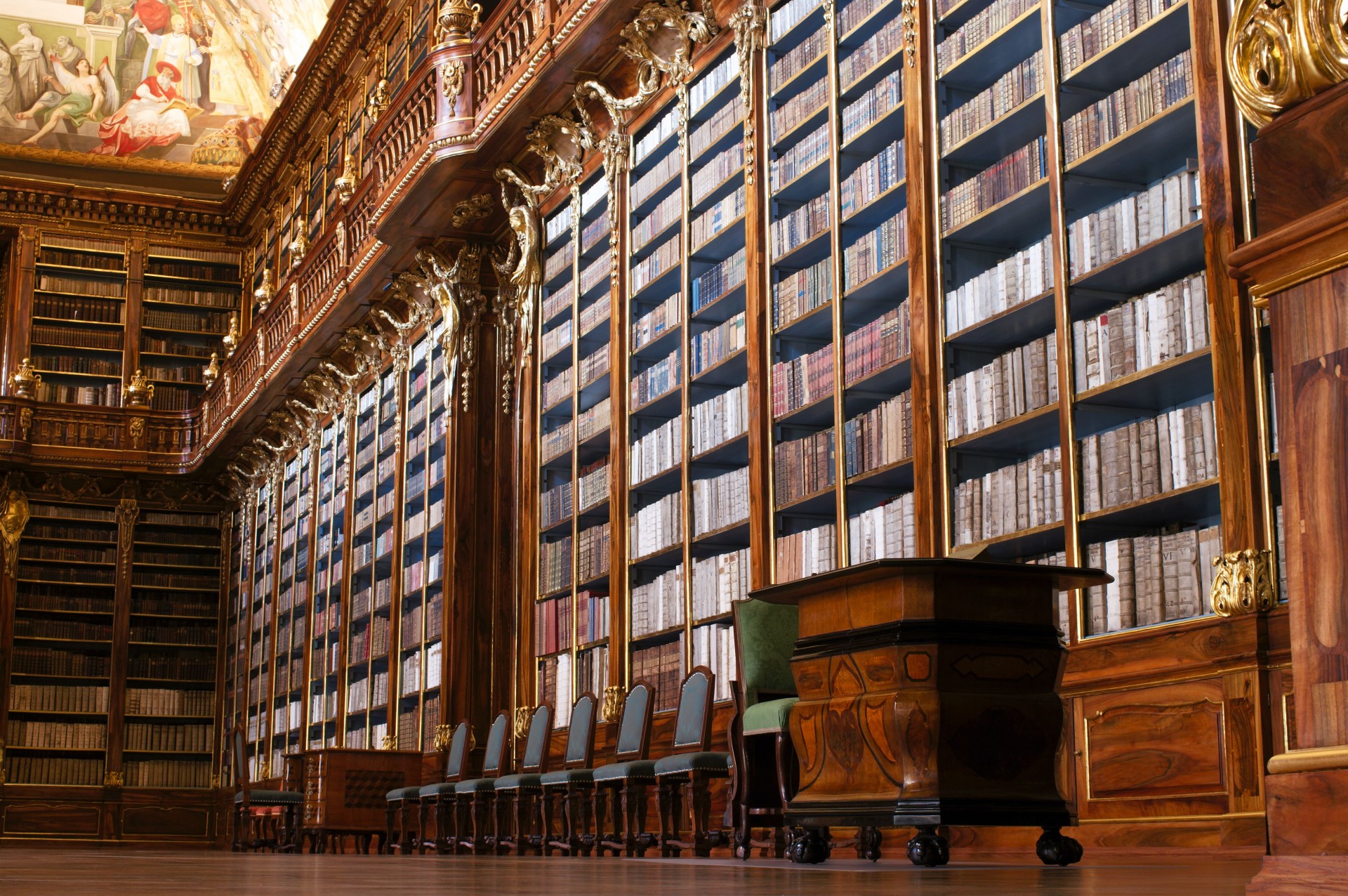 Strahov Monastery and Strahov Library is 2nd oldest monastery in Prague where was founded in 1143 by Jindrich Zdik, Bishop John of Prague and Vladislaus II, Duke of Bohemia. Strahov Monastery and Strahov Library are located very close to the Prague Castle and Petrin Hill. You should spare some time to visit here to witness one of the most beautiful buildings in Europe. By the way, the monastery is still active and serves to the monks and open for a public visit during the year.

History of Strahov Monastery and Library

Jindrich Zdick thought to establish a monastery of cannons in Prague after his pilgrimage to the Holy Land in 1138. With the help of the community of Prague and bishops, one of the oldest monasteries in Europe was planned to found on the Strahov district but the initiatives failed that time. In 1443, with the help of the Premonstratensians monastery established successfully. During the first years, a wooden monastery built and construction of a Romanesque basilica started. Within a couple of years, a stone church raised in the land of Strahov Monastery. An intense constructions works started after the completion of Romanesque basilica. In 1258 a massive fire hit the Strahov Monastery but it survived from disaster.

During the time of Hussites, a spiritual development halted for a while. Also, in 1420 Strahov Monastery was attacked and plundered by the citizens of Prague. Most of the relics, books and convent were burned during the attacks. Basically, Strahov Monastery was in agony until the end of the 16th century. Of course, there were a couple of attempts to revive the monastery and its functions but they were failed. In 1594, 12 monks started to live in the Strahov Monastery once more after many years.

Jan Lohelius became the archbishop of Prague in 1612 and appointed a new abbot for the Strahov Monastery, Kaspar Questenberg. He continued to expand the monastery with St. Elizabeth’s Hospital, lower cloisters and prelature. Also, a brewery for the monastery built during the time of Kaspar Questenberg. Toward the end of the Thirty Years War, unfortunately, once more Strahov Monastery was attacked and plundered this time by the Finnish regiment of the Swedish Army. They stole the most of the important relics and object from the monastery. Renovations works of the monastery finished around 1679 and in the 18th-century new building were constructed, summer refectory.

On the ceilings, you can see the frisk and writings from the Bible. These artworks made by the SiardNosecky. However, there is a compilation wheel as a part of the permanent exhibition. This desk used to compiling of texts.  Before leaving from the Theological Hall of the Strahov Library don’t forget to take a look the globes on both sides of hall; earth and astronomical. The interior of the Theological Hall last restored between 1993 and 1994.

During the era of Vaclav Mayer founding a new philosophy, hall emerged. The founding of this new library and opening it to the public access also prevented the abolition of Strahov Monastery during Joseph’s era. Construction of Philosophical Hall of Strahov Library made by the converting of the former granary. Just a little time after the converting of the granary a new construction work began. Philosophical Hall constructed between 1794 and 1797 by the Jan Lahofer.

When you enter the Philosophical Hall you will line of books on the top of the hall. You may only go there by using the spiral staircases located at the corners. However, you will be amazed by the Philosophical Hall where is 32 meters long, 10 meters wide and 14 meters high. Today, there are more than 200.000 books, old prints, manuscripts, texts and more inside Strahov Library about medical, pharmaceutical, mathematical, judicial, philosophy, geography and astronomy.

Where is Strahov Monastery and Strahov Library?

Strahov Monastery and Strahov Library is just located behind the Prague Castle where is also the home of the St. Vitus Cathedral. It looks like it is a bit far from the Old Town of Prague but please be sure that it worth visiting. You can take a bit long walk route if you like to walk for during the day. For the 4 km of walking route, you can start from the Prague National Museum and walk through the Wenceslas Square, then just pass the Klementinum and St. Charles Bridge. After passing the St. Charles Bridge go to the St. Nicholas Church and follow the road until you reach the monastery. If you go to Prague during summer it may be tiring to walk this long. So, you can use public transport to go to the monastery. You can find the public transport details below;

If you want to visit the Strahov Monastery and Strahov Library it is possible to go directly to there and buy tickets. The closest entrance to the Pohořelec tram station is the Main Entrance Gate located at the eastern side of the monastery. If you came to the monastery with public transport you can use this gate. However, if you came to the monastery by walking Viewing Hall Entrance is the gate located on the eastern side. Actually it doesn’t matter from where you enter the monastery. You can visit where you want regardless of the entrance gate. By the way, we can separate the section of the monastery into two; non-commercial and commercial ones. Check the list below;

Non-Commerical Parts of the Strahov Monastery

Commercial Parts of the Strahov Monastery

Strahov Monastery and Strahov Library are open for the visitor every day. Only 24th and 25th December and on Easter Sunday it is closed and not possible to visit the building. Ticket prices for them monastery is around bet 6 to 10 USD based on age, number of people and couple of other options. You can check the latest tickets prices for Strahov Monastery from this page. Also, if you are looking for a more comprehensive Prague tour to discover the historical heritage of the city please take a look at the widget below to find more options.

Strahov Monastery and Strahov Monastery with its Theological and Philosophical Halls are very popular among the travellers visits Prague. Besides this popularity, I think that this place should be on your places to see in Prague list. Because its long-standing history is amazing, inside and exterior of the building stunning. If you ever visited monastery and library please share your suggestions and thought on the comment section to help the others. Also, if you have any questions please feel free to share them.