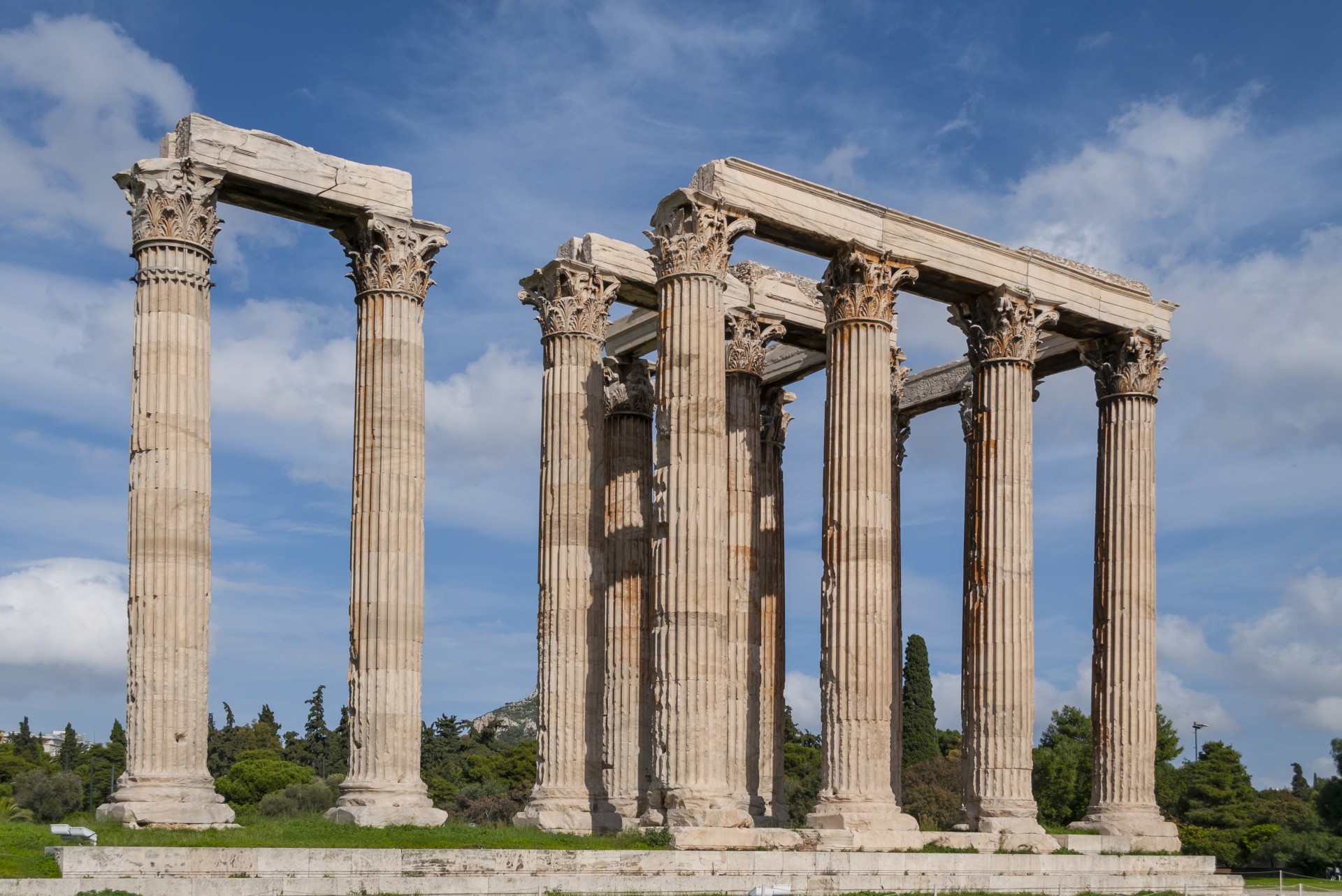 Temple of Olympian Zeus: Legacy of the Hadrian

Temple of Olympian Zeus history worth to read and learn. Besides, I always believe that you should know something about the history you are going to visit. Because when you know something about the place you will look at everything with different thoughts and eyes. This rule same for here of course. Please take a look at the history of this great temple. The temple is located in the south-east part of today’s Athens, very close to the River Ilissos.

The place where the temple is located part of the Athens Acropolis. That means this place is full of historical artefacts. The site has evidence of habitation and settlements from the Neolithic period. A famous Greek traveller and geographer Pausanias claim that the ancient sanctuary of Zeus was created by the Deukalion. Deukalion was to the son of Prometheus in Greek mythology.

The earliest archaeological evidence over this area dates back to the few more than the 6th BC. Peisistratos who was the son of Hippocrates was a ruler of ancient Athens between 561 and 527 BC. He started to build a very big Doric styled temple in 515 BC. The initial plan of the temples was made by a couple of architects whose name was Antiastates, Callaeschrus, and Antimachides. But the construction works didn’t go after the foundation made by the limestone.

After a couple of centuries construction works started again in 174 BC by the Antiochos IV Epiphanes who was the King of Syria. He employed a highly skilled Roman architect Cossutius. By the year of 163 BC columns and entablature of the Corinthian order temple finally finished. Temples were the Corinthian order which means the columns were thin and fluted with vertical lines cut over the surface, like almost the temples around Athens. But once again project stopped because of the death of the Antiochos.

Finally, Completion of the Temple of Olympian Zeus

Also today, there are very few remains of them. Around all these temples enclosed with Valerian Wall in 260 AD. Construction of this wall started in 256 AD and finished in 4 years. Almost after 200 years, the Basilica Olympieion (Basilica of Ilissos) was built on the northern side of the original precinct wall. Not only the Temple of Olympian Zeus, Temple of Zeus Panhellenios, Temple of Kronos and Rhea, but Hadrian’s Arch and Basilica Olympieion also places worth to see. So, you should spend your time to see all of them.

Architectural Features of the Temple

The temple was constructed over a wide-open space with 250 x 130 meters of dimension. This method gives an extra grandeur and magnificence to it. Also, this construction area was enclosed by using a porous wall built by using the rocks with high carbonate content. This wall buttressed with a regularly spaced columns along the interior face of the temple. There is a propylon gate in the north-west corner of that wall. In the center of all this, a massive and really big one marble temple raised with a dimension of 110.35 x 43.68 meters. These columns are unusually higher than similar temples. Each column is 17.25 meters high and 1.7 meters of diameter.

Remains of the Temple of Saturn and Rhea

In the beginning, there was a 104 column at the temples but today these numbers of the column are too low than 104. Inside the temple, there was a huge statue of Zeus and Hadrian made from gold and ivory. The fate of those artefacts is unknown. We know the materials of the Temple was re-used in other buildings. Today, we can’t believe this behaviour but during that time this was totally normal and common. Now, there only 15 columns of the temple are still standing and remained intact. 2 of them are in the south-west corner and 13 of them are in the south-east corner. Also, there is another collapsed column on the ground. This column collapsed at the storm in 1852.

Temple and other unique temples and places within this archaeological site is located southeast of the Athens Acropolis. We can say that the place the temple is quite central and it is very easy to go there. Hadrian’s Arch is over the Leof. Andrea Siggrou Avenue and lots of buses (165, 227, 790, 856) go through this road. Also, there is a tram stop for T4 and T5 tram lines very north of the temple. Your last option to go to the temple is to use Metro Line 2. Get off at the Syggrou Avenue station and cross it. Now, you can see the temple. Just take a ten-minute walk to it. If you visited Acropolis first you can take a walk from there to Temple of Olympian Zeus.

There are two different types of Temple of Olympian Zeus Tickets for people who want to visit the area. The regular tickets for adults are 6 Euros and 3 Euros for a discount. Also, if you are from the country in the European Union and under 25 you can get a free ticket from the admission at the cash desk. Don’t forget to bring your passport or ID for the free ticket. By the way, you can buy the Athens City Pass for around 30 Euros which is valid lots of museums, historical places and also on public transport. If you are staying a couple of days in Athens it is better to buy the Athens City Pass. Athens City Pass will also give you a priority entrance option.

The visiting area is opened daily both summer and winter. So, it is possible to visit the temple almost anytime in the year. If you want to visit the area it is better to know the opening and closing hours Temple of Olympian Zeus. You can find the list below;

Temple of Olympian Zeus is only closed on the 1st of January, the 25th of March, the 1st of May, Easter Sunday (Greek Easter) and 25th/26th of December. Also, be aware that the last visitor is taken to the temple 30 minutes before closing time.

Tours and Activities You can Join

One of the best ways to experience both Athen and the Temple is to join the guided tours with a licensed guide. Entrance ticket for the temple will be covered by the tour operators. You can find the three tours which are the top-rated by the people. Please take a look at the reviews of any of them before buying. Also, don’t forget to share your insight about them to always keep up to date this information for the people who are planning to visit Athens.

Highlights of  Temple of Olympian Zeus

If you visited the Temple of Olympian Zeus or planning to visit it, please share your experiences, suggestions, thoughts, and questions in the comment section to improve the quality of this post and help other people.

The temple is located at the centre of Athens, capital of Greece, and it is very next to the Hadrian’s Arch.

When was the Temple of Olympian Zeus built?

Temple’s construction continued over the centuries. The starting date is around 174 BCE, and the finishing date is 131 CE.

Who built the Temple of Olympian Zeus?

Why was the Temple of Olympian Zeus built?

Temple was built to honor the almighty god, Zeus.

Is it worth to visit the Temple of Olympian Zeus?

Yes, of course! Temple is the witness of the whole human history over the region. Visiting the temple worth for its every second.